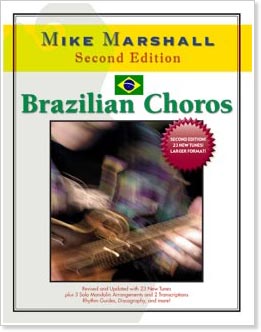 Oakland, Calif. — Mike Marshall has announced the availability of his popular Brazilian Choros - Second Edition, which will include 23 new tunes and a larger format for ease of reading, three Solo Mandolin Arrangements and two Transcriptions Rhythm Guides, Discography, and more.

Asked further how this edition differed from the first Marshall told us, "Our second edition has been painstakingly edited and expanded with additional transcription and a greatly improved layout by talented music editor and mandolinist Amy Burcham.

"7-string guitarist Colin Walker had a major role in addressing many of the harmonic questions. He artfully simplified chord progressions while maintaining just enough information to keep us all smiling.

"Mandolinist Daryl Robertson provided crucial input and the much-needed voice of the North American mandolinist throughout the process, making sure we maintained fidelity to Jacob do Bandolim's essential passages and proposing added guidance on rhythms and tune structure for non-Brazilian players.

"Percussionist Brian Rice and Brazilian bandolimist/guitarist Almir Côrtez shared their deep knowledge of rhythms used in choro so that we could indicate which ones might fit well with each tune.

"We have put all of our heads together and attempted to arrive at reasonably useful playable versions of these tunes. They are intended mainly for educational purposes, as a way to introduce folks to this amazing art form. Of course there is a tremendous amount of freedom allowed within the Choro tradition and players will have their own ways of varying these melodies and chord progressions based on their own backgrounds and inspirations."

"Mike Marshall's vast knowledge, virtuosity and continued explorations of many musical styles has put him in the forefront of today's mandolin educators. This expanded edition of Mike's ground-breaking treatise on Choro music is an essential vehicle for any mandolinist or musician wishing to study this unique and wonderful style from Brazil."

To celebrate the book's publication, Mike has made the first 7 pages available as a free PDF download (in links below) and his arrangement of Odeon.