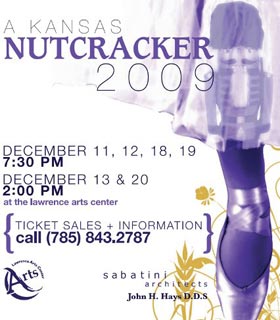 Lawrence, Kans. — When the Lawrence Arts Center decided to put on the holiday favorite The Nutcracker, it came with an unusual twist.

There would be appearances by abolitionist John Brown, border ruffians, Delaware Indians and a story filled with plenty of local history.

One of the creative forces in the production was Ric Averill, a career theater professional with plenty of experience playing tenor banjo and mandolin. Coupled with a keen sense of the town and state's history, A Kansas Nutcracker had been brewing in his mind for years.

There was just one big problem.

The production as he envisioned it would require a unique orchestra with special instrumentation. A score for the music as he wanted it simply didn't exist.

Now in its sixth year, we interviewed Jeff about his role as conductor and creative vision for the score and orchestra configuration for A Kansas Nutcracker.

Mandolin Cafe: You were asked by the Lawrence (Kansas) Arts Center in 2002 to arrange music for and conduct Tchiakovsky's classic Christmas ballet, The Nutcracker. How did mandolin family instruments end up in the orchestra?

Jeff Dearinger: Ric Averill and Deb Bettinger (Artistic Director for the Lawrence Youth Ballet) approached me in early 2002 about the project. They wanted an orchestra for the limited space of the arts center and wished to include some plectrum instruments, possibly mandolin, guitar or banjo. They wanted to create "A Kansas Nutcracker," an adaptation of the original set in 19th century Kansas.

The plectrum instruments were to lend a more "folk" sound to the production. Even with a long history of playing mandolin family instruments and conducting mandolin orchestras and quartets, my first reaction was not so positive.

The Nutcracker is a rather difficult piece. We're all so accustomed to it that we take it for granted. They said if I wouldn't do it they'd find someone else. My thought was that I was as qualified as anyone to handle it, so I accepted.

Mandolin Cafe: What was the process in putting together the orchestra?

Jeff Dearinger: My first step was to determine the orchestra's size. The pit at the LAC could hold 12 musicians and a conductor, so this decision was made for me.

Mandolin Cafe: You were obviously familiar with the music, so how did you select the instrumentation based upon their request?

Jeff Dearinger: If we were to have plectrum instruments I determined that mandolins were the best choice. We had mandolin players that could read music, which was essential. I wanted a section that could carry parts designated for a section of instruments in the original. A three instrument mandolin section can do this very well, so I selected mandolin 1, mandolin 2 and mandola.

A string section was essential and I selected violin 1, violin 2, viola and string bass. I reluctantly left out the cello, but we had limited space. A brass section would also have been good, but it would most likely have overpowered other instruments. For the wind section I selected flute (doubling on piccolo), clarinet and bassoon. These three instruments have a large range. The clarinet and bassoon could carry rather high notes as well as low notes. The flute/piccolo also had a large range. The orchestra was completed with a percussionist and a harpist.

Mandolin Cafe: And the arrangement?

Jeff Dearinger: The next step was to order a complete score. Most music can be simplified down to four parts. This is not always the case, especially with a piece as complex as this, but it seldom was too complex to be workable. The most difficult sections had to be left to the strings and winds. We had good mandolin players, but many passages were too difficult. With the essential sections determined by practicality, the rest of the parts were distributed as necessary to fill out the sound of each movement. Also, I tried to vary instruments as much as possible to keep the musical texture interesting. Whenever possible I used the mandolins in challenging sections as long as was within their capability.

I also had the freedom to leave out what was not appropriate to our instrumentation. The Pas de Deux for instance has a huge section dominated by brass instruments. I could not envision our small orchestra being able to pull this off and so left it out.

The rest was transcribing each movement, creating individual parts, printing them out and entering them into individual notebooks for the musicians.

Mandolin Cafe: What instruments did you find yourself borrowing from to fill out parts played by the mandolin/mandola section?

Jeff Dearinger: Interestingly, the mandolin section was at times self-sufficient. The mandolin for instance can play double and triple stops where a clarinet cannot. The two mandolins and one mandola could at times play a four-part section with ease. In the March of the Tin Soldiers, they have a short section playing the theme and harmony normally carried by trumpet, horn, clarinet and trombone. This was easily done incorporating double-stops as necessary.

Mandolin Cafe: What was your musical background and experience prior to this?

Jeff Dearinger: I attended Kansas University from 1968 to 1973, earning a Music Education degree. Four semesters of music theory and ear training were essential for this project. I became interested in the mandolin and guitar during college and in 1973 formed a mandolin orchestra called the Lawrence Mandolin and Guitar Ensemble.

I arranged many works for this ensemble. Back then there were no computers so scores were created by hand and parts were painstakingly transcribed from the score.

This group eventually evolved into the Uptown Mandolin Quartet. We recorded three CDs with my wife Beth Dearinger and Mike Stewart on mandolins, Charles Higginson on mandola and myself on mandocello. We played matching Loar period Gibson instruments: F4s, H4 and K4.

With the advent of personal computers I gradually became skilled with Finale and entered many of my earlier works into the program and now can print scores and parts with ease. New arrangements became easier using this software and I now have an extensive collection of music for mandolin orchestras and quartets.

In 1993 Scott Tichenor put the first Mandofest together and we decided to add a mandolin orchestra to the event in its second year. I selected three pieces to perform and conduct. The orchestra was well received and became a permanent part of Mandofest in subsequent years. I've also assisted or conducted the CMSA (Classical Mandolin Society of America) en masse orchestra in the past and have arranged pieces for them as well.

Mandolin Cafe: Explain the amplification used for the mandolins.

Jeff Dearinger: The mandolin is not able to play loudly enough to hold its own as an orchestral section. We wanted the instrument to sound as natural as possible so we use high quality microphones mounted on the instrument. In our case there is a small microphone mounted to the tailpiece of the instrument with a flexible cable that positions it very near the instrument. The mic is then fed into a pre-amp and the speakers are positioned in the pit so that audience and the other musicians can hear them.

Mandolin Cafe: How many production hours would you estimate went into the arrangement?

Jeff Dearinger: There are 23 different movements of varying length in our production. I would say the longer ones took 2-3 weeks to complete (I have a day job), the easier ones maybe less than a week. After completing the scores I had to create the parts. In doing this I tried to include cues when possible. Also, the music had to be organized to accommodate page turns. Some movements are up to five pages long for some instruments.

Mandolin Cafe: What music editing tools did you use to compose the music?

Jeff Dearinger: I started with Finale Allegro early on. I've upgraded the software three times and now use Finale 2004. My personal computer is a Macintosh G5 tower running Tiger 10.4.11.

Mandolin Cafe: The dates for this year's performances?