I expected smoke and thunder when I played my first Gibson F5 mandolin signed by Lloyd A. Loar.

But alas, as a friend warned me, it's only a mandolin.

Still, there are special qualities in this fairly mint, virzi-bearing F5 that Loar signed on March 31, 1924. From the flowerpot inlay on the headstock to the expertly carved neck and the rock-solid glue joints in the body, this mandolin reeks of quality workmanship.

The sound, feel and playability were different for me, too. I've held a Loar in disrepair, but this was my first opportunity to actually play one, high adventure for a bluegrass/jazz-grass fan.

It's a thrill because I've read or talked about these holy-grail mandolins since the 1970s. I've listened to them make music on recordings and marveled at the rich, clean tones. In recent years I've written about the Loar lore.

This column is for all of you who have never played the maple, spruce, ebony, and pear wood that craftsmen carved and glued together back in the early 1920s. They made instruments that design legend Loar personally inspected and designated good enough to bear his signature on the Master Model label glued inside the sound chamber.

I went for years with only faint hope that I'd ever play one.

When a friend in another state acquired one, my hopes rose. But he always brought his road mando to our rare jams—never the irreplaceable fern.

At festivals I'd see bluegrass stars fresh off the stage walk by with their Loars in cases.

On the Cafe, I'd read the comments by noted musicians and F5 scholars about their Loars versus the many others they had played.

And, of course, in recent years I gazed at noble-looking Loars advertised for sale on various Web sites. If only grandpa had played an F5 instead of the A1 that was passed down to me. But such is the economic status of both my roots and my future that my longing would never be fulfilled.

Like a rock in your shoe that feels bigger the more you walk on it, the thought that I was missing a key component of a mandolin player's journey intensified. Part of me nonetheless had faith that my time would come.

Suddenly the stars aligned; my time did come, when a friend was asked to baby-sit a Loar. We sat down in his living room. He opened the case and took out the Loar, and then handed it to me with the casualness of a host passing a cup of coffee.

The wood, fresh from the case, felt cool to my hands. There was silence. A mandolin has no life, no sound, unless a human being strikes the strings.

That's a trait the world's greatest mandolins share with those that are made most humbly: it's the human spirit, soul and mind that exert the most influence over the music. The mandolin does not create, it merely responds to the creator.

But in the beginning, I had to set the tone.

I chopped a G chord and then played a noodle riff. The notes were strong and full, but not astonishing. There was sweetness about the sound. Playability was good.

So I cut loose and pounded away on bluegrass tunes and slowed up for airs and waltzes. I passed it over to friends present, and we played the Loar along with other mandos in the room, including F models from Clark and Nugget and an old snakehead Gibson A.

With playing, the Loar began to open up. It grew louder and fuller in tone with every passing half hour. Plus, the more I played it, the more I got the feel for how to pull tone from it with the right hand.

Was it better than the others?

To my ear, you can't say better or worse, just different. All sounded good.

But I have to say, when it came to tone and power from treble strings up the neck, especially way up the neck, this was easily the finest mandolin I've played. (I'll qualify that by saying my experience with fine mandolins is quite limited compared to many experts who hang out here at the Cafe.)

Still, the evenness of the volume obtained from notes played in first position and those fretted closer to the bridge was the most notable musical trait to me. As for aesthetics, I was surprised at how thick the finish seemed on this mandolin. It was a high-quality finish, with a fine dark-burst stain on the top, but thicker than the finishes I'm used to seeing on modern mandolins.

I mentioned the flawless workmanship, but it's worth repeating. The Gibson shop did nothing but the best work on this Master Model. Loar must have had the team on their toes.

For that reason alone I hope many of you who haven't played a Loar F5 at least get to hold one someday and maybe plink out a few notes. When you consider that in the early 1920s you could buy a Loar for a few hundred dollars—which may have been a lot of money then, but is nothing like paying $150,000 for one today—the workmanship standard at the Gibson factory in Kalamazoo was remarkable. 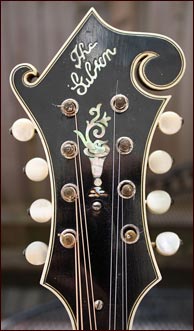 The artisans who built these mandolins worried about raising children and paying monthly bills just like we do today. No one applauded when another batch of F5s was sent to Loar's bench for his approval. It was just another day's work. They walked out of the factory with their lunch pails into cold Michigan winters and hoped for an eventual pay raise.

Today, what they built inspires countless copies and variations. Among them is the fine Master Model made by the current incarnation of the Gibson company, at a Nashville shop.

Playing one of the originals is special, and I'm very grateful that I've been lucky enough to do so. I look forward to the next time.

But for mandolin players who are Loarless, it's ok. You're missing an interesting moment, but you're not missing the main show. Playing a Loar did not alter my world.

It's the music in general that's the show, and it's the spirit of the people playing the music that lies at the heart of what really matters.

The musical voices of other mandolin models are strong, and a world without their departures from the Loar sound would be far poorer. There are also many Loar replicas that are not that far from the real thing, if not identical.

To hold an F5 that the master held, played and approved is undoubtedly a bluegrass blessing. But walk through any bluegrass festival campground at night, and you'll hear music that bears the tone and spirit inspired by Loar and his creations. His signature need not be present for the music to be.

Additional information:
List of all known dated Loars, courtesy of the Mandolin Archive.