My Long and Winding Road to Bill Monroe

Blessed are those born on raised on the mountain.

Some of us had to walk a long way across the flatlands to get there. But we do, because the mountain just keeps calling. And unlike most of society, we are not afraid to climb it.

That's how I feel about Bill Monroe.

There are mandolin players contributing to Mandolin Cafe discussions who heard Monroe records on the home stereo when they were in the cradle. They spent their teen years refining their copies of his licks on their mandolins. Saying hi to Bill at a festival was as common to them as morning coffee. They jammed with him at Bean Blossom.

I envy those people and I respect the stories they have to tell.

Many of us loyal Monrovians, though, had a much more difficult path to the master. But our love of the music is just as deep, and that speaks mightily for the power of Bill Monroe's influences from stage and record.

Music in my childhood home, except for a few records on a scratchy player, was whatever was playing on the radio station chosen by my parents. Most of the time that was big-band pop tunes from the 40s and 50s that were still airing as the era of Ike transitioned to JFK.

What I really loved was anytime that I heard it was the banjo or any kind of acoustic music. But except for a television show like Porter Wagoner on Saturday afternoons, or those too-rare times with bluegrass on Andy Griffith or the Beverly Hillbillies, my tastes were constantly being groomed in the direction of smooth, orderly, polite music.

Bluegrass music was a far away, musty, antique and hard-to-find music form when in my teen years I obsessively listened to AM top forty radio. I had heard the name Bill Monroe but I didn't know clearly what his music was about. But I did love those Byrds high harmonies, and the obscure, acoustic, non-radio songs on Lovin' Spooful albums. The Beatles knocked me out. But I was especially drawn to their songs featuring acoustic guitars.

Finally came The Band, Dylan's Nashville Skyline album and then the Nitty Gritty Dirt Band. Now I was starting to get obsessive about this older sound and the mandolin had caught my ear and eye as an especially charming instrument. 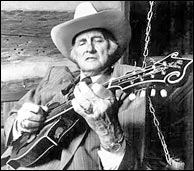 Of course, a full-fledged bluegrass revolution was beginning on the national scene by the time I hit college in the early 1970s. But most of us were isolated from it by culture of the times.

Flatt and Scruggs were the beginning and end of bluegrass for me at first, mostly because I knew "Foggy Mountain Breakdown" from top 40 radio via the "Bonnie and Clyde" movie soundtrack.

Nobody taught you anything about Monroe's music in a high school or college classroom. You didn't see any bluegrass on television but for maybe once in awhile on the Glen Campbell and Johnny Cash television shows.

You had to stumble on it accidentally.

But I had my antennae up. Somehow I stumbled upon a Saturday morning bluegrass show on the local public FM station. And I began reading everything I could about bluegrass, including articles about a new thing called a bluegrass festival.

In the college town record shops I learned there was a small but vibrant "folk" music section at the back of the store. I started buying bluegrass and folk records, but not Bill Monroe.

For one, I don't remember seeing many if any Monroe records. But I also hadn't heard him enough to know if I liked him.

The folk music radio shows played more Flatt and Scruggs, Jim and Jesse and some of the newer artists such as Norman Blake.

But slowly, some Monroe songs began to show up on the play lists and register in my mind as his classics for the genre, mostly "Blue Moon of Kentucky" and "Uncle Pen."

I soon belonged to that group of people who knew that Monroe had hired and brought together Flatt and Scruggs, but who thought that perhaps he was a faded, long-dead artist.

Author Richard D. Smith so poignantly and accurately outlined that group in his wonderful biography of Monroe, "Can't You Hear Me Calling."

We couldn't help our ignorance. I lived many miles from the Grand Ole Opry and had never been to a bluegrass festival in my life. All I knew was that I loved the music when I heard it.

Then as I kept listening, I kept hearing a little more Monroe music here and there. Remember that in the early and mid-1970s the reissue albums were scarce and the small labels that would make those happen were in their infancy or not yet formed.

But when I did hear more Monroe, I didn't go wild for it. His sound was less refined than Flatt and Scruggs. There was no compromise toward smoothness in the vocals like with the modern bands I was beginning to follow, like the Seldom Scene, or more familiar country-rock leanings of the late versions of the Byrds or Dirt Band.

Monroe's vocals were jagged and emotionally raw. The instrumentals were in-your-face punchy. Some of the tunes had echos of my 1950s toddlerhood, but others had more ancient tones that reminded me of the black and white sod house homestead photos of my ancestors, always with people and their favorite horses together, that hung on the walls in the upstairs bedroom at my grandparents farm house where my great-grandmother used to sleep.

Yet I was young and trying to be cutting edge. Monroe seemed too rough and ancient.

But things changed. Life brought some hard times and I developed some rough edges and raw emotions, too. I was starting to play some mandolin. And I found a record store that had a bunch of Bill Monroe LPs on sale for $2 apiece. I took home about eight Monroe records in one day.

Listening to that pile of Monroe records changed my musical life.

I began to understand his skills, soulfulness, honesty and uniqueness. Monroe's music has an honest, energetic quality that I began to crave.

About five years after that transformation to full-fledged devotee, I heard Monroe play at a Worlds of Fun theme park in Kansas City.

No matter the venue, he was on that night and I was transfixed. At the break, I made so bold as to approach Kenny Baker and ask if I could interview Monroe for the little weekly newspaper I worked for.

"Bill, would you have a minute for this feller here," Baker said, "he seems friendly enough."

Baker had looked me over pretty good first, and was cautious. Only when I read Smith's book years later would I learn that Monroe's life had been threatened during this period and everyone was on guard.

But the master came over. He was tall, gracious, willing to answer questions but obviously anxious to get it over with.

"If you want to know where my music comes from," Monroe said, "listen to my record out called 'My Last Day On Earth.' That says it for me."

I was star struck and thrilled by that conversation. Though I knew he'd probably used that line a lot with other admirers and interviewers.

Years would pass and I heard Monroe play at a few more festivals and concerts. I had my picture taken with him once. My buddy, the late Forrest Rose, got to play bass with him on a tour and we had endless fun talking about that.

Smith's book deepened my understanding of Monroe's why and wherefore.

These days I don't feel star struck by Monroe. I could walk up and talk to him with no qualms if he was still on this earth.

But my admiration for his music is deeper than ever, and my thirst for it is still strong.

The combination of his playing and singing, and that of the wonderful musicians he drew around him, is just special.

There's other great music in the bluegrass genre. But there's nothing just exactly like Monroe and the Bluegrass Boys.

And these days I listen to many types of acoustic music, and music in general.

But sometimes at night at home, or driving down the road toward somewhere, this craving to hear a certain authentic sound will come over me. I dig through the CDs for Bill Monroe, put it in the player and there it is, a sound as reliable as a sharp ax.

A mandolin and a voice, accurate and true, forever blue.