Take one well-seasoned mandolin player, mix thoroughly with a guitarist and bass player, sprinkle in a guest fiddler and a second mandolinist, then take the whole ensemble on the road and allow new music to bake each night on stage before a live audience.

And this new music is less than 24 hours old, or even minutes old.

Flinner and buddies are at the end of a tour where they write new music every day and play it on stage that night. They fill in the set list with music written the day before.

"We each write our tunes individually during the day, then we get together before the show to rehearse them," Flinner said in an interview from the road via e-mail. "So we don't know what the other two guys will bring to the table."

Flinner showed me he's a monstrous good mandolin player—tone, timing and expression—on the album he did with David Grier and Todd Phillips. I've watched and listened for his work ever since. 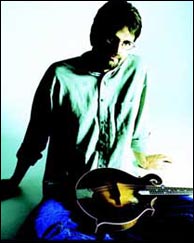 So it caught my eye when I saw the news about The Matt Flinner Trio launching their second Music du Jour Tour.

"I've noticed that the overall style does seem to evolve over the course of the week," Flinner said. "All three of us seem to be writing partly in response to the previous night's show (or the last few nights'). So we try not to get ourselves stuck in any stylistic rut, and we try to keep the variety flowing. Sometimes two of us will have tunes that are somewhat similar in character. We just separate those in the set list."

Most of us in Cafe land feel bold doing a handful of our well-aged original tunes on stage in front of a live audience.

These guys are fearless.

Their musical intent is composition with some improvisation, minus cliché chops.

"Locking in musical lines on short notice can be difficult, depending on the complexity of the tune," Flinner said. "We each write out a chart for each tune, and we are often sight-reading on stage. Since I'm not a great sight reader (though I'm probably getting better this week), I try to memorize as much as I can before the show. But it's always very unpredictable. Some tunes are easier to play on the spot than others. And part of the fun is just having no idea what's going to happen. At least the audience knows that we're not going to be on auto-pilot."

This music feels freer as it's played, Flinner said, especially for solos. Some arrangements evolve on stage.

"I don't see us ever playing 'free jazz' or anything," he said. "I think structure of some kind is part of the point. But we can always experiment with structure and how to go about creating it."

This edition of Tour de Jour is winding down with a show in Ketchum, Idaho on Friday, Jan. 25, and one in Salt Lake City on Saturday, Jan. 26. Click on the news link above for details.

The next fresh Flinner mandolin music most of us will hear is a Compass Records release scheduled for summer. Also featured will be Todd Phillips on bass, David Grier on guitar, Andy Hall on resonator guitar, and Stuart Duncan and Gabe Witcher on fiddles.

But the Flinner Trio is also contemplating a CD, possibly a "best of" the du Jour tours. They've recorded some shows, but mostly to remember compositions for later use.

I'd like to hear a du Jour Tour in my town.

Flinner says he'd like to take it East and South and see if watching new landscapes through the windows during road trips changes the music.

They're currently doing eight gigs in nine days in the Rockies. That's a lot of new music to drain from the creative juices pool.

"I think the hardest thing about doing a tour like this is maintaining stamina," Flinner said. "Touring and playing night after night can be tiring as it is. We're under a fair bit of stress to write on the spot, learn tunes quickly, and often rehearse at the very last minute before show time. Day after day it does get physically wearing.

"But it is as rewarding a tour as I've ever been part of, and we're having a blast.