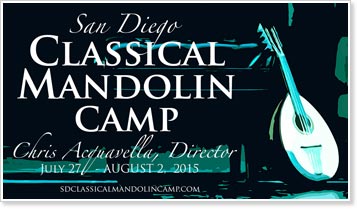 SDCMC is very excited to have the talented Venezuelan virtuoso, Ricardo Sandoval, as the SDCMC special guest artist.

The camp will explore the depth and breadth of the classical mandolin, from baroque to modern times, through five days of classes, rehearsals, and evening concerts.

SDCMC strives to create a fun musical experience for mandolinists of all ages and abilities in a friendly and supportive atmosphere, ideal for learning, creating and sharing music together.

Each evening there will be a featured artist concert with the final evening culminating with the SDCMC orchestra performance. Once again, the SDCMC will be joined by members of the Bach Collegium San Diego for a fantastic evening of Early Music on historic instruments.

Tuition for the SDCMC is $425 which includes breakfast, all classes, orchestra rehearsals and performance, music/class materials and evening concerts. The SDCMC is also offering partial attendance options this year (just classes or just orchestra). Tuition cost does not include lunch/dinner or lodging. Please visit the San Diego Classical Mandolin Camp website for more information and to register online.

Class syllabus and schedule, as well as orchestra repertoire will be announced on the SDCMC website and Facebook page very soon. 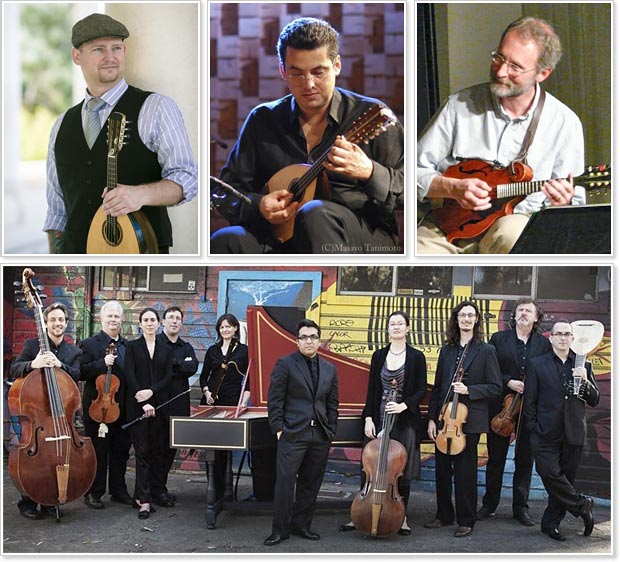 Chris Acquavella - Chris Acquavella graduated First Class Honors from Trinity Laban Conservatoire of Music & Dance, London UK. Chris studied under the instruction of Alison Stephens. He won the Wolfsan Foundation Music Award in 2004 and the TCM Trust Silver Medal in 2006. Chris is a member of the Ger Mandolin Orchestra and performs world-wide in a solo and chamber music capacity. Aside from chamber music, he concertizes with various orchestras & ensembles throughout the world such as Trinity String Ensemble (UK), Dartington Festival Orchestra (UK), E.G.M.Y.O. (DE), Landestheater Detmold (DE), Bach Collegium San Diego (USA), San Diego Opera (USA) and the San Diego Symphony (USA). He has been an instructor at the 2011 & 2013 Mandolin Symposiums and several CMSA Conventions. Chris is a composer of new works for mandolin and mandolin ensembles. Several of his works are now published by Joachim-Trekel-Musikverlag, Hamburg.

Ricardo Sandoval- As a child growing up in Venezuela, Ricardo was nurtured by his country's rich musical tradition. After obtaining his degree in music from the Instituto Universitario de Estudios Musicales (IUDEM) in Caracas, he set off to Germany to continue his studies at the Musikhochschule Wuppertal with MargaWilden-Hüsgen and Gertrud Weyhoffen, graduating with the highest qualifications. Ricardo has won several international competitions in Germany (1999) and Italy (1998). He is frequently invited to join and participate in festivals in Europe, Latin America and Japan. Ricardo now resides in France where he teaches and regularly gives concerts in classical and Latin American music. He also directs an amateur mandolin orchestra in Luxemburg. Ricardo's knowledge and skill on both the classical mandolin and traditional Venezuelan music makes him a perfect fit for the 2015 SDCMC.

William Bradbury - Bill Bradbury is an Emmy Award-winning composer who received his doctoral degree in music composition and theory from Cornell University. He is currently Professor of Music and Music Technology in the Visual and Performing Arts Department at California State University, San Marcos. His creative activities include compositions for orchestra, chamber ensembles, soloists, electronic media and computer-based multimedia collaborations with other artists: a work with visual artist Deborah Small and actress Dana Case was commissioned for SITE97, an international art show based in San Diego and Tijuana. Bradbury's most recent large-scale composition, LEAVES for Narrator, Piano and Orchestra, was commissioned in honor of Palomar College's 50th Anniversary and premiered by the Palomar College Orchestra with Dr. Peter Gach as soloist. He has written musical scores for several films including Anza Borrego: Seasons in the Desert for which he received an Emmy Award for composing and arranging in 2001. In 2002, Bradbury was commissioned to write the score for KPBS television's film, San Diego's Coastal Wonder. He is also an accomplished mandolin player and composes for and performs with the duo MandoBasso.

Bach Collegium San Diego - Founded in 2003, the BCSD is one of the premier early music ensembles in the United States. BCSD's mission is to diversify the music offerings in the San Diego community by providing engaging, accessible, historically informed performances of repertoire from the Renaissance, Baroque, and early Classical eras. Its principal members bring long standing experience from international ensembles such as the Academy of Ancient Music and the Orchestra of the Age of Enlightenment, as well as from this country's leading ensembles like American Bach Soloists, Philharmonia Baroque, and the Portland Baroque Orchestra. The ensemble has earned an impressive reputation, captivating diverse audiences by their unique style and highly expressive and provocative approach to the Renaissance and Baroque repertoire.

garypaynephoto
Here is a promo video for the camp. Looks like a lot of fun.