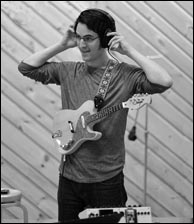 Jason Anick in the studio with his Saga electric mandolin.

Midst the cacophony of sound on the showroom floor three days into the January 2010 NAMM show, Stratocasters, Marshall stacks, Zildjian cymbals blaring at inhumane decibel levels, I happened upon the sound of a sweet Gypsy Jazz fiddle at the Saga booth. I was no stranger to the siren allure of the John Jorgensen Quintet who often played a demonstration set or three at their display, but this was special. A tall, lanky but handsome young man was romancing the mic in the quintet with the dulcet tones of his violin as he channeled Grapelli, and it pleased me to recognize the face of one I'd recently serendipitously discovered on an obscure jazz mandolin YouTube video.

I was fascinated by the magic melodies of Jason Anick, his near gymnastic feat with bow and arpeggio never betrayed an earnest musicality, lines in homage to 'Trane, Diz, and of course Django himself. I was already impressed with the impromptu video of his electric mandolin stylings prior, to see him play in person on his "main" instrument even more striking.

Two and a half years later, now on a prominent staff position at the prestigious Berklee College of Music, and (almost) two CD recordings later, I have the privilege of introducing this swing musician luminary Jason to the Cafe readership through another installment of our artist "10 Question" series. The young man's 10,000 hours, including his work with Jorgenson and first call appearance with stars of the Boston music scene, have served him well, and he's only getting started. Listen to his music and you'll see why.

Ted Eschliman: Violinists who pick up the mandolin confound me when they complain about the difficulties of the pick. 29 inches of flailing wood and hair seems a phenomenally harder piece of equipment to manipulate than a tiny stiff piece of space-age plastic. How easy was it for you to adapt to a pick coming from the violin?

Jason Anick: I've definitely heard violinists complain about using a pick before. I think it's mainly because they assume it can't be too hard, but they quickly realize it's a skill that takes time to master just like bowing. Luckily, I started playing guitar when I was around 13, so when I picked up the mandolin a few years later it was an easier transition.

Ted Eschliman: Obviously, with your jazz skills, you've had to transcend classical pedagogy to develop your style. When you started, how much of your origin as an instrumentalist was printed, traditional sheet music verses aural?

Jason Anick: I started off playing classical music so I was reading a lot, but my dad taught me fiddle tunes and had me jam along with him so I could also learn music by ear. I always preferred learning music by ear so I could pick up on the subtle phrasing, dynamics, and feeling that often get lost in sheet music.

Ted Eschliman: Some of your YouTube videos included pop music, such as the Beatles. Have you always been primarily motivated by jazz and pop or does your development include any heavy classical or orchestral experiences as a child?

Jason Anick: I started taking classical violin lessons when I was 5 and over the years have played in a number of different orchestras. Playing in a powerful string section with an orchestra is such a rewarding feeling! I definitely have a deep love for classical music as well as jazz and continue to practice classical pieces on both violin and mandolin to keep up my chops and work on new techniques. As for the Beatles, they have always been one of my favorite bands, and I have found that a lot of their pieces work well when rearranged for a jazz setting (You Never Give Me Your Money, Something, and Michelle work particularly well). I have lived by the principle that good music is good music regardless of the style, and I feel that every style has something to teach me about my own playing. That being said, I am also the kind of person who will listen to the same jazz album on repeat for an entire year until I can play/sing every solo. I think the combination of an open musical mind as well as an intense focus and dedication to perfecting your craft is what makes a great musician.

Ted Eschliman: You've toured at a very young age with some phenomenal musicians such as Robin Nolan and John Jorgenson. How has working with them (and their incredible other side musicians) shaped and defined your playing?

Jason Anick: I have been so blessed to have the opportunity to tour with some great musicians over the years like John Jorgenson. Performing night after night with artists like John has without a doubt brought every aspect of my playing up a notch. I have learned a lot about the art of performing as well as the business side of music, which will help me immensely as my own solo career continues to evolve. I think the better the musicians you play with, the better you will be. 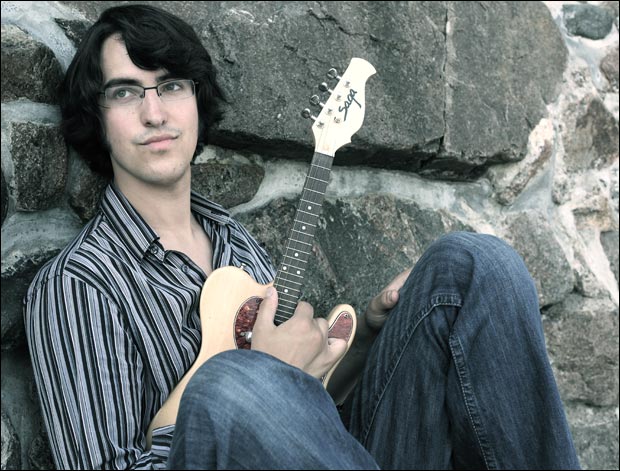 Ted Eschliman: I've asked the question of you in the April 2012 Mandolin Sessions (from Mel Bay) finale about your approach to improvising, constructing good solos, and you mentioned the "equilibrium of intention and spontaneity." What do your credit your own understanding of the jazz language in chord structure, phrasing, swing, and feel? How much of what you plays is scales and arpeggios vs. just "blowing?"

Jason Anick: I have spent many years studying and dissecting classic solos from jazz greats like Charlie Parker, Sonny Stitt, John Coltrane, and Stéphane Grappelli. The first thing I listen for and try to emulate is their feel. Then I study their harmony and try to understand what sounds good over the chord changes and why. With each solo I learn, I increase my musical toolbox and continue to form my own musical voice.

I supplement transcribing and listening with frequent scale and arpeggio studies. My goal is to learn all the modes, arpeggio inversions, and chords up the neck in what I call "mapping out the fretboard." All the notes are there, you just have to find and develop a relationship with them. I am always looking to discover new ways of approaching chords and harmony.

When I am improvising, I try not to think too much and instead let my inner inspiration and musical ear take over in hopes of constructing a cohesive musical statement. There are moments when I even surprise myself with what I improvise, and that makes it all worthwhile. The way I see it is the more thinking you do in the practice room, the less you have to do when you are on stage.