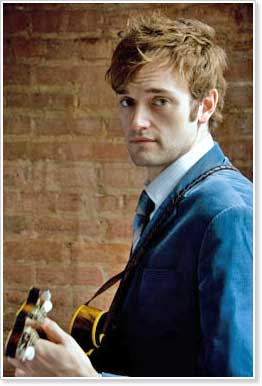 No stranger to formal composition, Thile wrote a four-movement chamber piece, The Blind Leaving the Blind, for Punch Brothers, which premiered at Carnegie Hall in 2007 and was recorded by Nonesuch for the band's 2008 album Punch. He has also written a piece for piano and double bass for Emanuel Ax and Edgar Meyer, which they premiered on their duo tour in 2007. That piece also had its New York premiere at Carnegie Hall. Thile plans to record an all-Bach album for Nonesuch in coming seasons.

This concerto is an ambitious foray into new territory for Thile. On writing his first work for orchestra, Thile has said, "To me, every completed piece of good music forms a dot on a sheet of paper; tons of dots that instantly imply that they are interconnected in an inevitable way. The patterns they suggest are apparent, and I feel it's the job of a composer—or anyone who thinks deeply about music for that matter—to connect the dots. One dot may be Radiohead's 'OK Computer', another may be a collection of fiddle tunes from Eastern Kentucky, and another may be Bartok's Concerto for Orchestra. If the connecting is done well, hopefully you can pull back, having contributed a new dot."

Thile came to classical music around age 16, when several members of his extended family "simultaneously attacked me with Bach." The order and clarity of Bach's music had a profound impact on him. Thile describes, "The music that had meant the most to me up to that point was, in a completely beautiful way, very haphazard. Since then, I have craved the purity of conception and precision of execution that characterizes formal music. But the haphazard and the controlled need not be separated; rather, they are two pieces of the same puzzle that happily coexist in my favorite pieces of music. Bach's Chaconne in D minor, for instance, not only exemplifies conceptual and developmental integrity, but also possesses the urgency and immediacy of improvisation."

Thile was recently featured as a soloist on Yo-Yo Ma's 2008 Christmas album, Songs of Joy and Peace, with Renée Fleming and Edgar Meyer. Additionally, he has collaborated in performance and on recordings with Joshua Bell, Hilary Hahn, Sam Bush, Jerry Douglas, and Dolly Parton.