Adam Steffey is a mandolin player who makes explaining acoustic music to new listeners difficult. He can play the old music so well, yet he's also a boundary pusher, one of the players out there on the cutting edge of bluegrass, newgrass and music that just is.

Most people outside our musical world—in rap, rock and pop society—consider the mandolin an antique used for folk music.

Those who listen to a broad spectrum of acoustic music know better. There's a frontier, and Steffey is one of the people pushing it outward. From his recordings with Alison Krauss to his current work with the Dan Tyminski Band he's played with a recognizable, smooth and melodic style.

Now, he's got a new album coming out that's going to bring him fresh attention from fans and fellow musicians alike. "One More For the Road" is scheduled to be released Sept. 22 on the Sugar Hill label. This is his first solo effort since he released "Grateful" eight years ago."

Opening cut from One More For the Road: Deep Rough

"I've been wanting to get back in the studio and do another solo project for some time now," Steffey said. "I was trying to find a window of opportunity to get back in the studio. At the suggestion of my old friend and bass man, Barry Bales, I contacted Gary Paczosa. Gary is not only one of the best studio engineers around, but he also began working with Sugar Hill a short while back doing A and R work and artist development. I've done a bunch of recording with Gary over the years and called him to see if Sugar Hill might be interested in doing a project with me and luckily he signed me up. We began recording this past February. Barry Bales and Gary Paczosa co-produced the album and made it so much fun to make." 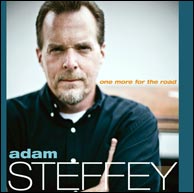 One More For The Road - Photo Credit: Sugar Hill. Click to enlarge.

Steffey pulled some major players and vocalists into the studio.

"The album is not strictly instrumental, however," Steffey said. "Of the twelve songs on the album, there are four instrumentals (two originals and two traditional tunes) and the rest are vocal tunes. Sometimes I find that all instrumental albums can get monotonous and rather cliche at times, so going in I knew I wanted some strong vocal material."

Ronnie Bowman does a guest lead vocal and sings harmonies. Tyminski and Krauss each take a vocal lead. Chris Stapleton of the Steeldrivers was enlisted for some harmony work.

"Overall, the album can be categorized as bluegrass," Steffey said. "But I wanted the record to have a wide variety of tunes that would showcase all the players and singers. "I've been very fortunate over the years to have worked with all these folks on various projects. I knew all I had to do was get them together and turn them all loose and just let it happen."

Even on his own album, Steffey prefers approaching the music from the sideman view rather than as the leader.

"When my playing days are through," he said, "if anything, I'd like to be remembered as a 'band contributor'. I've always tried to play and add to what the players and vocalists are doing without getting in the way or taking away from the arrangement of the song. As a player, I think you can say enough with with a few notes instead of many.

"'Less is More' and 'Just Because You Can, Doesn't Mean You Should' are quotations that are always on my mind when I'm playing. To me, the challenge is getting the right balance of melody, tone, and taste while still playing to those around me. Not detracting from the song by playing too many notes or flashy licks, but instead, coming up with ideas that are interesting. Hopefully with this album, folks will not be distracted by what the mandolin is doing, but they will hear the overall arrangement and how the mandolin works with all the other instruments and vocalists." 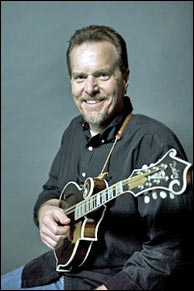 Steffey plays slide licks in solos and in backup work with a flowing style that's unique, but so smooth and pretty that tones mask technique to most listeners. He can play a rapid series of slides to create a flowing sound.

"I love instruments with the ability to create that great sustain of a note or chord," he said. "Unfortunately, the mandolin doesn't have as much sustain as some, but you can still get enough to have the same effect. In a lot of cases, tremolo is used to fill spots when there might be a melodic pause. When these occur, I'll try both tremolo and the slide or held out notes to see what might work. Most of the time I'll opt for the long sustained slide. I just love the sound and it seems less 'busy' in most cases. Don't misunderstand me though; I love tremolo and try to use it with the same effect. You can vary between the two and add a lot of effect, especially on slower tunes.

"It's something that I work on a lot. I'm constantly trying different ways to attack a note and give it the best tone and sustain as I can."

I'd say he's pretty successful on the tone thing, one of the best. How can other players emulate?

"When I'm playing, I try to think of it more like the pick is 'sliding off' of the string rather than 'hitting' at it," Steffey said. "If you take your pick and slap at the string you will get a harsh tone. I try and get the same tone on up-strokes as I do on down-strokes. You can work on this by setting a metronome at a slow tempo and just doing some scale and arpeggio work. Try and give each note the same value and play each one, whether a down or up-stroke, with the same tone. I find that when you do this at a slow tempo and then work your way slowly upward, ALWAYS thinking of each note's tone and the separation between each note, your playing will begin to smooth out and spill over into all the tunes you play.

"Also, experiment with various picks and strings. A lighter gauge pick can have a big effect on your tone, as can lighter gauge strings. I recommend trying out a few different combinations to see what you like best."

Sometimes a mandolin player's chop has a full and steady presence in a song, yet it's so smooth and perfectly timed that there's no intrusion into the vocals or other instrumental solos. Steffey's chop has always been bold yet clean, and it was used very effectively in his recordings with Krauss.

"To me, the single most overlooked item in folks' practice routines is playing rhythm and working on their timing," he said. "I feel you should work on this with the same thought as you do working on a solo. Now, granted, it's not nearly as fun, but it is just as important. Most of the playing that I do is in a bluegrass setting, and I've been very fortunate to have worked with some of the best players in that genre. The one thing that all of these folks concentrate on as much as any other part of their playing is their rhythm and timing. This is not to say that it's always going to be perfect or mechanical, or that it won't 'breathe' a bit. But it's very easy to play over when you're soloing. If you get into a jam session and it just doesn't feel very easy to solo or play along with, in most cases it's because it's loose rhythmically.

"Working with a metronome is very helpful with this. I'll set the metronome at the tempo a song will usually be played, and then I'll just hum the tune to myself and chop along. Again, this can get boring. But if you do this with tunes that you're working on or play regularly, I can assure you that you will reap the benefits. It will make you a more consistent player both rhythmically and in your solos. Always be aware of all the folks you are playing with and be sensitive to what they're doing. If they're playing softly, adjust what you're doing accordingly. If someone you're playing with is really hammering a section of a tune, stand on it a little. Think of the dynamic possibilities when you're playing and have fun with it."

He came to the mandolin in east Tennessee. His father was in the Army and his family moved around until he was 10, when they settled in Kingsport. He tagged along with his grandfather, Fred Carter, to "The Carter Family Fold" in Hilton, Va., to hear music. Steffey became interested in the mandolin after hearing the late Dempsey Young play with Lost and Found.

A cheap flea market mandolin and lessons led to the bluegrass scene, a progression through several bands and now a place in the ranks of the most respected mandolin players. Although Steffey takes a more humble view of himself.

"When I hear Chris Thile, Mike Marshall, Sam Bush, David Grisman and the like, I don't even consider myself a player," he said. "Those folks play! I stand amazed at where these folks go musically and can only hope that something I might do someday would have effect on someone, in the same way that these folks have influenced me."

Steffey for certain has participated in some wonderful music making, in the studio and on stage. He's broadened the mandolin's role in backing vocalists and left his mark as an instrumental soloist, and he's still out on the frontier.

The mandolin has no limits in modern music, he said.

"I see no reason why the mandolin can't be used in any type of music, and I'm sure that it will be."

- His current mandolin: A Sim Daley Classic F5 Distressed Model
- Picks: Blue Chip
- Strings: D'Addario EXP-74
- Set up: "I keep my action fairly low. I used to use a really high action, but over the years I've lowered it considerably."

Selections from Adam's new solo CD One More For The Road, available September 22, 2009 from Sugar Hill: