Josh Hungate shares something in common with all of us, but he's also dueled his way to something that separates him from most of us.

Hungate's peers at Kearney High School and many other people he meets don't know much if anything about a mandolin and the music he plays, which makes him a modest National Mandolin Champion via the Walnut Valley Music Festival.

"I try not to tell my friends at school that I'm a national champion," he said, "when people don't even know what the thing is."

The thing is that the best acoustic roots musicians in the world congregate during the third weekend of September each year at the festival in Winfield, Kan. Most are there just to play music, hang with friends or perform as paid on-stage entertainers.

But there's another class of musician—those with gunslinger nerves in their makeup— who show up primed to compete in world or national championship guitar, banjo, mandolin, fiddle and autoharp contests. High-level amateurs and seasoned pros alike take aim at trophys, instruments and cash prizes: but mostly it's about the prestige and the inner satisfaction of triumph.

Hungate, 18, entered his first mandolin contest in 2004 at Rocky Grass in Colorado. He didn't place. But he started noticing how the winners played, and he began a steady practice schedule to catch up. 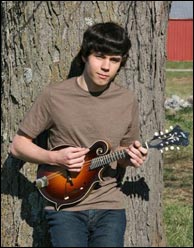 
The next year he took second in the mandolin contest at Rocky Grass. But he also discovered a shortfall in his playing. One of the top players that Hungate admired explained that he wasn't sure what tunes he would play until he got going in the contest, and that he often improvised during his contest performance.

"I realized practicing for a contest wouldn't help me in all the ways I wanted to play," Hungate said. "Practicing the same four songs all year wouldn't do it, and I didn't like the idea of just competing with music or showing off."

So he simply began working to play anything and everything well, with some serious help from his family.

Jason and Audra Hungate, his parents, both play music and his father is a strong guitar and banjo player. Ten-year-old brother Alex is burning practice time on dad's Martin D-18, and three other younger siblings are dabling with piano and percussion.

The Kearney, Mo., family has long attended Winfield and other festivals. Josh and his father also play local bluegrass gigs with tunes ranging from traditional bluegrass to newgrass and swing.

"I started playing mandolin at age 9," Hungate said. "Before that, I took classical violin lessons. But my dad played bluegrass so he was teaching me fiddle tunes while I studied classical. When I went over to the mandolin, I immediately liked it much better than the violin."

So too began his challenging of explaining to other kids what instrument he played.

"I usually just say it's like a little guitar tuned like a violin but you have to pluck it."

When he decided a few years later he wanted to make his mark on the mandolin contest circuit, he began a steady practice schedule.

"My dad always told me I could do anything I wanted to if I put my mind to it," Hungate said. "He suggested I practice two hours a day."

That paid off in technique improvement. 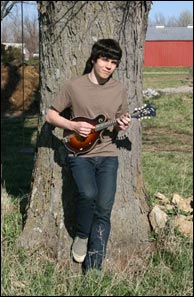 And as Hungate whipped through some of his contest tunes for me such as "Whiskey Before Breakfast" and "Red Haired Boy," it's clear he has that youthful ultra-fast speed yet with clean, full and sweet tones, especially in the treble register. He's also one of those players that can come at a tune from multiple melodic directions and improvise at will.

However, a contest player also needs gunslinger nerves, as he discovered when he first entered the Winfield competition in 2007 and didn't place. Mistakes kill your chances of winning and worrying about mistakes makes them more probable.

"The first time, I was really nervous," Hungate said. "I was trying to win and not let down my family and friends."

But by last fall he was a veteran on the contest circuit, having competed at several festivals and having won the Kansas state championship. He felt like he belonged in "the group" of the frequent contest top dogs, and he was playing with a more relaxed and improvisational approach that sounded fresher than playing strictly rehearsed licks.

"This last fall at Winfield, my Dad told me, 'let's just play and if you place, great, and if not we'll have fun.' "

They found themselves playing in the finals, and afterwards, Hungate found himself called backstage among the top three finishers to pick out their choice of mandolins to be presented later onstage along with the trophies and cash prizes.

The teenager heard himself named first, the National Champion.

Hungate played a 1990 Flatiron F5 in the contest. But the Collings MF he won at Winfield is now his main instrument. It's got beautiful wood, a sweet tone and a unique wheat inlay on the peghead that signifies it's a Walnut Valley festival prize.

There were some other perks, too. The win earned him a chance to jam with performers such as the Greencards and Kenny and Amanda Smith, some of his heroes. He roamed with festival grounds with other contestants, new friends.

Now he's looking forward to college, meeting other young musicians that will challenge and broaden his play. He'll be exploring any music that catches his ear.

"I feel that there's room for the mandolin to grow but still be played in familiar forms," Hungate said. "You hear so much mandolin on all kinds of songs on the radio these days. I don't want to be strictly bluegrass."