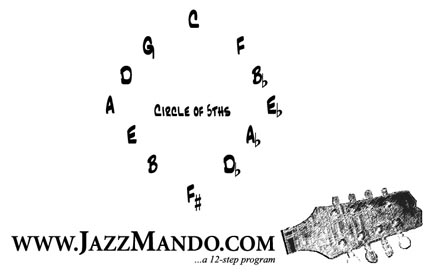 We're now on our fourth of a five-part series on 3-note vamping chords. We started simple with triads, moved to embellishing/passing chords, and dipped our toes into dominants last week, but this time we want to exploit a common music theory concept discussed many times before, the circle of 5ths. As we uncovered last week, you can do a lot to propel the harmonic progression of any song with a V7 chord, even add some that weren't there in the first place. We did this with a simple diatonic progression: 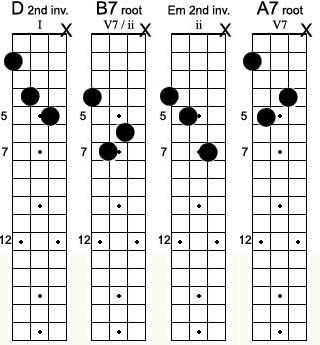 Note we took the ii chord of D (Em) and inserted its dominant, the B7. This time we want to take the V7 of the V chord, E7 and replace the Em: 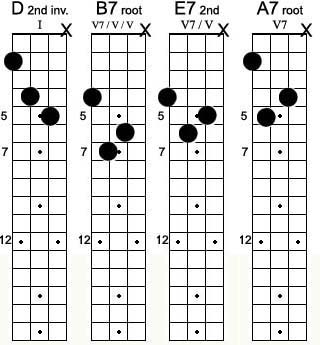 Subtle point: In shorthand, many will refer to this as a major II (II7) chord, but that's technically incorrect, as the two chord of the major scale is not major. As we've demonstrated in this series, we want to think functionally, not just what the chord is, but what it's doing. In this case, it is modifying the A7 chord (V7), so the reason we call it the V7 of V (V7 / V) is to imply purpose. It may seem a long way to go around it, but ultimately, the goal is to give you a harmonic tool you can repeat and use in other keys!

Continue with the other inversions up the neck: 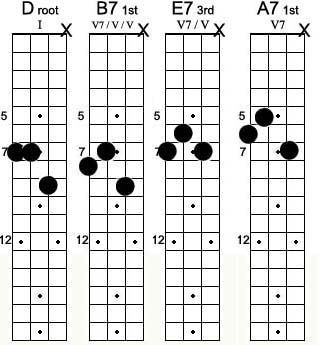 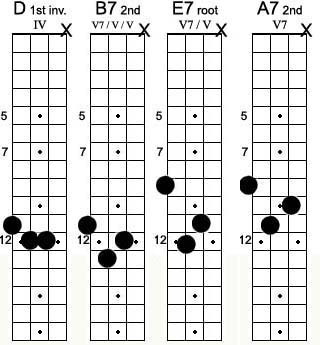 Again, some might call the F#7 the VI7, in the key of D, but we still want to imply function. We're on a "secondary" Dominant Journey, and as we mentioned earlier, we're traveling the Circle of 5ths:

Note, even though there is no D chord in this block you are still implying "D-ness" by ending it on the A7, the V7 chord. A D major will follow it all nicely!

Blocking out the other inversions for you: 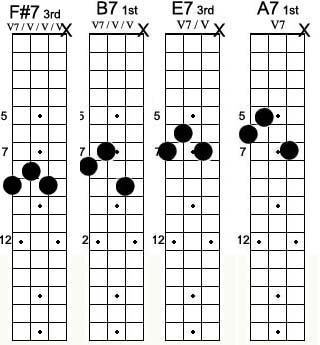 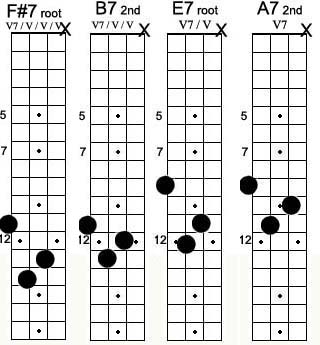 Notice how smooth the voicing is on these, minimal movement fret to fret. Even if you didn't intellectually grasp the "science" in all this, you have to admit it's a pretty cool sound.