We've done several articles on 3-note chords, particularly 7th chords, including Major, Minor, and Dominant 7ths. It's long been our contention you don't need to worry about hitting all four pair of strings to get the most of your chords. Sometimes, not worrying about that 4th voice frees you up to move around the fretboard, plus liberate the pinky for all kinds of delicious mischief when you just voice comping chords on the thickest three strings.

But how about we go back a step further? There's nothing that says you always have to do 7ths or even extensions beyond that. Once in a while, a simple triad is enough, especially when you employ the tricks within this lesson. Triads (sans the 7th) based on the diatonic scale give you the same sense of motion and energy, without betraying the tonal center. Think of the song "Lean on Me." It's all a sequence of diatonic chords. I, I, ii, iii, IV... IV, iii, ii I, etc.

Lets start with simple triads based on the first three notes of an A scale: 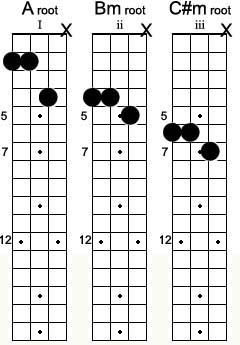 If you were playing a song with multiple measures of A chords, you could fill in with these, move up and down, back and forth: 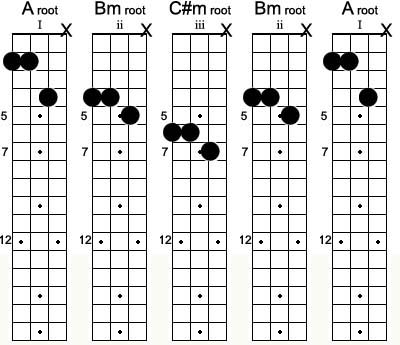 Many pit orchestra scores include simple instructions written: "Vamp." These will be measures where the conductor can adjust the length of the music to the dialogue, giving the actors more breathing room to articulate the dialogue. If a pianist or rhythm player were to just thump, straight A chords, the orchestration would be pretty dull. Chances are chords would be spiced up similarly and in a way that doesn't lose the sense of "A-ness" so that the singers and orchestra could return to the music. Of course, you can do the same in jazz comping.

Let's open it further by adding the IV chord. Move it up and down, mixing different chords in sequence: 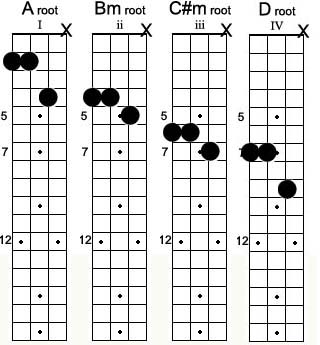 Next, let's broaden this by using a different inversion of the A chord . We spelled the earlier ones based on the root, aptly named "Root" position. Let's spell the chords with the 3rd (C#) as the lowest note (also known as 1st inversion, fellow theory geeks): 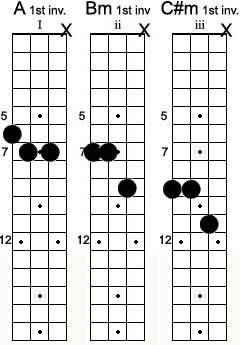 Add the IV chord, too: 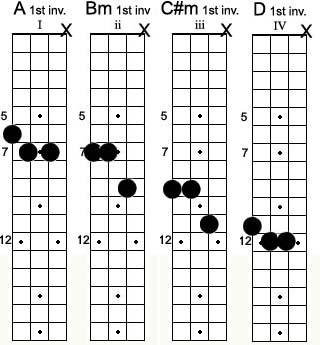 We still have one incarnation of the triad left to put as the lowest (bass) note, and we'll arbitrarily call this the 2nd inversion: 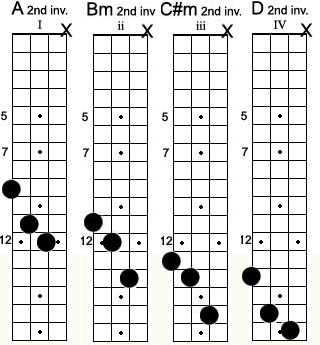 It gets up there in the fretboard stratosphere, but it's a good solid set of blocks for you to learn and internalize! Have fun moving these around. If this doesn't work on your mandolin as well, transpose the latter set to the key of D. We can do that, you know: 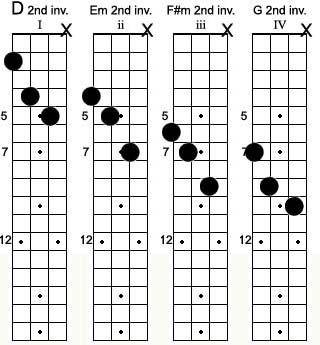 Note, you can run the board with this, literally. You can transpose the A root inversions to the key of D, and the 1st inversion as well. Step out and move these blocks into other keys and really have some fun. You'll see these repeat all over the place, and if you can internalize these 3-note blocks, you can open yourself up to untold possibilities!

1.) Chord melody. You have a free voice in the E string for voicing a melody
2.) Chord extension. Add a Maj7, Maj6, Add 9, etc
3.) Vamping texture. Make your chord comping interesting by inserting the variations into your background accompaniment.

Start practicing these in large and small doses. It will pay you back exponentially!

Fitting in with triads
5-string chording. A different way of thinking...