Part 2 - Transition: Moving the up the Fingerboard

PDF charts that accompany this lesson

NOTE: this is part two of this lesson. See part one. 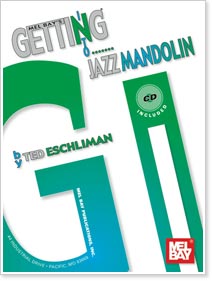 Ted Eschliman is the webmaster of jazzmando.com, a former undergraduate music theory educator and long-time seasoned performer with several recordings under his belt. Since 1998 Ted has focused his creative energy in jazz mandolin, an instrument he thinks has broader appeal in the musical community that is yet to be tapped. He is currently a contributor to Mel Bay's Mandolin Sessions and is author of Getting Into Jazz Mandolin from Mel Bay.

By now, you should be pretty intimate with the variations of the four basic FFcP positions from FFcP Part 1. If you haven't already, you should be playing these variations not only down a fret and/or down a string, but also starting everything up on the higher frets.

For example, your 1st FFcP in the key of A could move up and start on the 7th fret, and you would be using the same scale degree relationships only now in the key of D. The only new challenge would be tackling the "closeness" of the higher, narrower frets-eliminating the obnoxious buzzing or "near misses" of a poorly placed left hand finger.

Particularly difficult is the 4th finger, as you worked so hard to strengthen and stretch in the lower frets. Now the challenge isn't so much strength as it is accuracy.

Hint: SLOW it down! Work on a clean, bell-like pick articulation. A clear, crisp attack is a crucial start, but that golden sustain can only happen when you find the magic "sweet spot" between the frets.

Work into your practice routine, all four FFcP, starting on the 5th and 7th frets (6th & 8th too). After weeks of getting comfortable with this, it's time to work on a smooth transition between the positions.

This next exercise, we will combine four FFcP in an attempt to work on shifting positions. We'll use six patterns and 2 different keys. The goal is to make the transition as seamless as possible, connect the patterns as if they were one.

You might want to review the "Ionian Mandology" patterns again shown above. Once you're comfortable with them you can focus on the task at hand: a comfortable, confident shift from FFcP to FFcP! Now it's time for "Moving on Up" (the accompanying PDF).